Are you de icing your car incorrectly

Temperatures are dropping, and as we go into spring, we are quite likely to witness our car windscreens freezing over. You may think you have been doing it the best or quickest way possible but could you possibly be doing it wrong? You also may want to rethink leaving your car on while you wait inside for it to warm up. Here we are going to tell you if you have been de icing your car incorrectly.

What you should avoid when de icing your car

Many people are unaware that police are now saying if you leave your vehicle unattended while the engine is on you could be breaking the law. This is because you are failing to do your legal obligation of being in control of the vehicle while the engine is running. Another thing to think about when leaving your car unattended is you exposing yourself to car theft. If caught leaving your car to de-ice when your not around you could also be facing a £20 fine and 3 points on your licence. An idling engine is also back for the environment it produced twice as many emissions than an engine does when it is in motion.

For your windscreen to freeze the temperature doesn’t have to go below freezing, but due to it being glass it is more likely to freeze in comparison to other surfaces on your vehicle.

Scraping away the ice

When we are in a rush in the mornings, the first thing we tend to pick up is something hard or sharp to help carve through the ice. Using anything other then a vehicle icing scraper could cause serious damage to your windscreen including deep scratches in the glass. Not only is this a pain but it can also significantly affect your vision when driving. You may also want to be aware that you could be in for a £60 fine and points on your licence for limited vision. 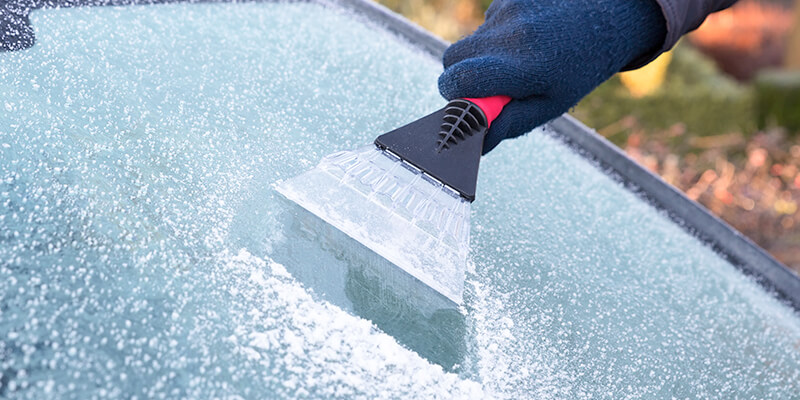 Boiling water is one of the most dangerous things you can do to your windscreen. The shock of the extreme heat to your freezing windscreen can lead to cracks and breaks.

Your windscreen wipers are great for getting rid of any excess water, but if you are trying to use them to remove the ice, you’ll most likely find this near impossible. You could also be damaging the rubber section of your wipers meaning you will need to replace them.

What techniques should I be using?

One of the easiest and quickest ways to de-ice your car in the morning is to use a good quality de-ice spray; you can purchase these from most hardware or supermarket stores. However our recommendation would be to try Car Plan from Euro Car Parts, its strong and won’t cost you an arm and a leg.

If you don’t fancy purchasing deicing spray, there are a few home remedies you can look at including a water and salt solution. This will effectively remove any ice from your windscreen although we would like to mention try to avoid your car paint as the salt could potentially have damaging qualities. Another way to prevent ice from forming on your windscreen is to use an old rag or towel and soak it in a water and salt solution, leave it on your windows overnight, and your car windscreen will be less likely to freeze over.

We recommend using one part water to three parts vinegar; it is great for removing thick and stubborn ice that won’t budge. This remedy also works well if you spray it on your windscreen the night before you travel as it will prevent the ice from sticking so much to the glass.

If you are thinking of using water and alcohol, we suggest using two parts alcohol or even surgical spirit and one part water.

Each of these home remedies work well due to their low freezing points; they make it harder for ice to form or easier to get rid of any ice. 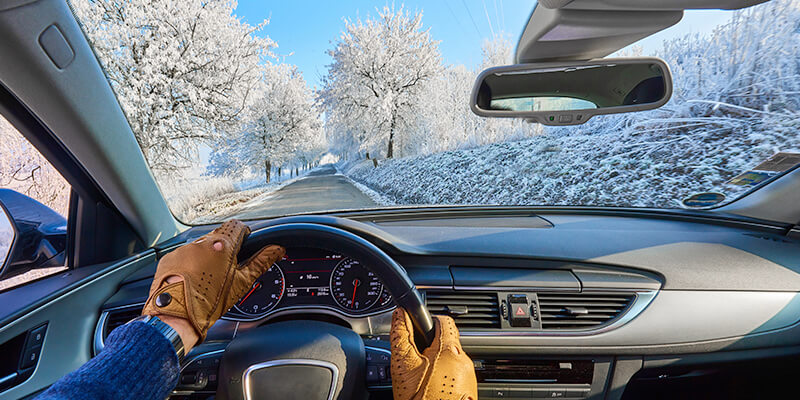 We always say leave around 10 to 15 minutes to effectively de-ice your vehicle, while you may have gotten rid of all the ice that formed on the exterior of your car depending on the temperature you may also have some form on the inside. You can also experience a significant amount of condensation on the inside of your window that can take a considerable amount of time to clear before you have the best visibility.

Be careful when driving when you have frosted windows. In the UK we have freezing temperatures with glorious sunshine and many people can be taken away by it. Meaning on many occasions, they don’t think about the black ice on roads that can form. This usually is where ice has developed without any cracks making it less visible to road users. Driving on ice can be extremely dangerous, so you should take extra care when your car has iced over.

It is important before taking off for your journey ahead you have enough time to defrost your car as it isn’t something that should be rushed. Leaving your car to heat on the driveway may seem like a good idea, but you could receive a significant fine and even points on your licence. There are only two things that you should really use when defrosting your car, using a specific car scraper to remove and hard ice from your windscreen and deicing spray. There are a number of home remedies to choose from that can also help with removing your ice.

To prevent ice from forming on your windscreen, we recommend soaking a towel in one of the home remedies the night before and placing over the glass. If you are finding that your car doesn’t warm up quick enough when you have deiced, you may want to think about having an air conditioning recharged in Milton Keynes.